This OSR minimalist game was originally written by Javier «cabohicks» García (+Dwayne Hicks) for issue number 2 of the collaborative Spanish fanzine Vieja Escuela («Old School»). This publication had a space limitation for each contribution, so in its initial version the game had 4 pages. In the third issue of the fanzine it was expanded with another 4 pages and then grapas&mapas edited this 16 page compilation.

After translating it into several languages, we have decided to release it also in English. We hope you like it and if so you are welcome to share it with other possible interested gamers.

GRAB A POD COPY AT LULU.COM

To help you understand what this game is about we have translated (partially) an interesting post that Javier wrote on his blog (http://cabohicks.blogspot.com/2017/02/vieja-escuela-jdr-notas-de-diseno.html); it can serve to understand much better the design goals behind the game. 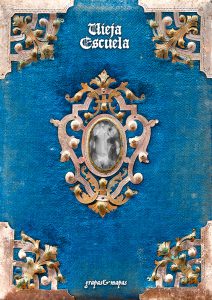 The main goal I had in mind when I started to write this ruleset for Vieja Escuela fanzine was to produce a really a playable game. Taking into account that the fanzine editors hardly give us two weeks to deliver the articles, you will understand that there wasn’t too much time to test the ruleset. Therefore I had to start with something that I knew that could  work out of the box. To make things even worse we had a big space limitation (all text had to fit in both sides of an A4 sheet) setting an strong constraint around what I could include. For me was clear that there isn’t a better solution for the two above problems than rely on all the material that we have available thanks to the OGL license and the OSR scene. It’s not only the fact that the core rules are more than tested and are at the heart of many editions and retroclones, it is also the big number of minimalist games that we have at our disposal as a source of inspiration: Microlite74, The Black Hack, Whitehack, Swords & Wizardry Light, Searchers of the Uknown, etc.

In any case, surely the readers of the Vieja Escuela are not miss that the game is highly inspired in  Swords & Wizardry with the addition of some of my home rules which I have been using in my campaign for a couple of years now. This is what I chose to try to address the issue of producing a much tested ruleset as possible.

Yeah, but this has skills!

Yes, it does. It looks like every OSR sympathizer has a different idea about what the OSR means and I’m not different. The use of the attributes to solve the actions of the characters has been always a problem for me. The characters need high attributes to be successful in what they do and that’s something I do not like. A character with medium scores should be as playable as one with high scores.

Don’t get me wrong, rolling for your attributes is like a mini-game in itself and high values must grant certain advantages (greater damage, more hit points, additional spells, etc.). But from my point of view your training and experience should be your biggest assets when resolving actions. That’s why the game includes a group of six general skills not affected by Ability modifiers that players increase by spending points. The Cleric is no longer the one who has the best perception by chance.

I would say that the most generalized criticism of basic D&D is the little difference that there is between two adventurers of the same class. You can argue that you can solve it by player interpretation, but that is a debate to hold another day. The skills somehow introduced a mechanism to differentiate a character, but I thought that  the use of backgrounds could be a very simple and powerful (not to mention fast!) mechanism to give players a way to customize their characters. It is a mechanism that we have already seen working in 13th Age or Whitehack with good results. It brings a lot of versatility with a minimum consumption of space in the rules.

But then, is there no vancian magic?

As much as it hurts, no, there is not. From the beginning I wanted to develop a minimal game that was easily scalable. I did not want a ruleset that could only be used for a few levels, and that means you can not use a magic system based on spell lists. It did not take me long to remember Whitehack, a game that I reviewed here. That’s why Vieja Escuela has the magic system that it has: open and dependent on the understanding between the player and the referee.

And that’s why there are no clerics right?

Exactly. With a very open magic system, nothing prevents a sorcerer, wizard, magic user or whatever you call it from using healing spells. Also, I hope you will agree that the figure of the cleric doesn’t really fit in the Sword and Sorcery theme. In any case, I believe that the ruleset invites any referee who wishes to introduce new classes or limit the magic to do it easily . In fact, if it had not been for the limited space, I would have introduced the concept of white, black and gray magic that I proposed in this other post.

If you have any questions you can contact us through G+ or by e-mail: fanzineviejaescuela@gmail.com